The combination of ability scores, race, class, and background defines your character’s capabilities in the game, and the personal details you create set your character apart from every other character. Even within your class and race, you have options to fine-tune what your character can do. But a few players — with the DM’s permission — want to go a step further.

This section defines two optional sets of rules for customizing your character: multiclassing and feats. Multiclassing lets you combine classes together, and feats are special options you can choose instead of increasing your ability scores as you gain levels. Your DM decides whether these options are available in a campaign.

Multiclassing allows you to gain levels in multiple classes. Doing so lets you mix the abilities of those classes to realize a character concept that might not be reflected in one of the standard class options.

As you advance in levels, you might primarily remain a member of your original class with just a few levels in another class, or you might change course entirely, never looking back at the class you left behind. You might even start progressing in a third or fourth class. Compared to a single-class character of the same level, you’ll sacrifice some focus in exchange for versatility.

To qualify for a new class, you must meet the ability score prerequisites for both your current class and your new one, as shown in the Multiclassing Prerequisites table. For example, a barbarian who decides to multiclass into the druid class must have both Strength and Wisdom scores of 13 or higher. Without the full training that a beginning character receives, you must be a quick study in your new class, having a natural aptitude that is reflected by higher-than-average ability scores.

The experience point cost to gain a level is always based on your total character level, as shown in the Character Advancement table, not your level in a particular class. So, if you are a cleric 6/fighter 1, you must gain enough XP to reach 8th level before you can take your second level as a fighter or your seventh level as a cleric.

You add together the Hit Dice granted by all your classes to form your pool of Hit Dice. If the Hit Dice are the same die type, you can simply pool them together. For example, both the fighter and the paladin have a d10, so if you are a paladin 5/fighter 5, you have ten d10 Hit Dice. If your classes give you Hit Dice of different types, keep track of them separately. If you are a paladin 5/cleric 5, for example, you have five d10 Hit Dice and five d8 Hit Dice.

When you gain your first level in a class other than your initial class, you gain only some of new class’s starting proficiencies, as shown in the Multiclassing Proficiencies table.

When you gain a new level in a class, you get its features for that level. You don’t, however, receive the class’s starting equipment, and a few features have additional rules when you’re multiclassing: Channel Divinity, Extra Attack, Unarmored Defense, and Spellcasting.

If you gain the Extra Attack class feature from more than one class, the features don’t add together. You can’t make more than two attacks with this feature unless it says you do (as the fighter’s version of Extra Attack does). Similarly, the warlock’s eldritch invocation Thirsting Blade doesn’t give you additional attacks if you also have Extra Attack.

If you already have the Unarmored Defense feature, you can’t gain it again from another class.

Spells Known and Prepared. You determine what spells you know and can prepare for each class individually, as if you were a single-classed member of that class. If you are a ranger 4/wizard 3, for example, you know three 1st-level ranger spells based on your levels in the ranger class. As 3rd-level wizard, you know three wizard cantrips, and your spellbook contains ten wizard spells, two of which (the two you gained when you reached 3rd level as a wizard) can be 2nd-level spells. If your Intelligence is 16, you can prepare six wizard spells from your spellbook.

If you have more than one spellcasting class, this table might give you spell slots of a level that is higher than the spells you know or can prepare. You can use those slots, but only to cast your lower-level spells. If a lower-level spell that you cast, like burning hands, has an enhanced effect when cast using a higher-level slot, you can use the enhanced effect, even though you don’t have any spells of that higher level.

For example, if you are the aforementioned ranger 4/wizard 3, you count as a 5th-level character when determining your spell slots: you have four 1st-level slots, three 2nd-level slots, and two 3rd-level slots. However, you don’t know any 3rd-level spells, nor do you know any 2nd-level ranger spells. You can use the spell slots of those levels to cast the spells you do know — and potentially enhance their effects.

A feat represents a talent or an area of expertise that gives a character special capabilities. It embodies training, experience, and abilities beyond what a class provides. See the feats in the Player’s Handbook for more information.

At certain levels, your class gives you the Ability Score Improvement feature. Using the optional feats rule, you can forgo taking that feature to take a feat of your choice instead. You can take each feat only once, unless the feat’s description says otherwise. 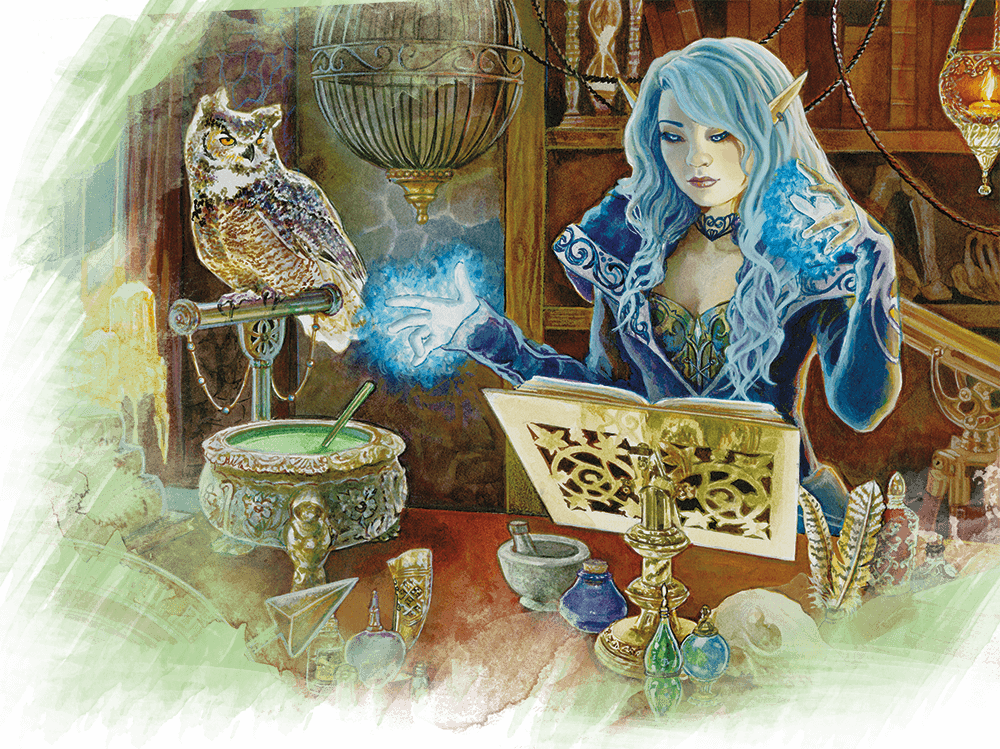