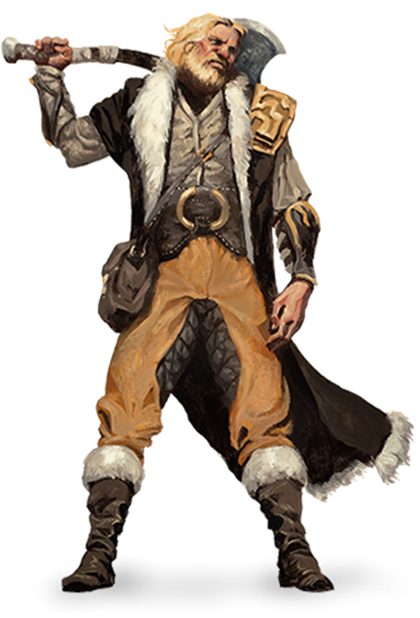 A tall human tribesman strides through a blizzard, draped in fur and hefting his axe. He laughs as he charges toward the frost giant who dared poach his people’s elk herd.

A half-orc snarls at the latest challenger to her authority over their savage tribe, ready to break his neck with her bare hands as she did to the last six rivals.

Frothing at the mouth, a dwarf slams his helmet into the face of his drow foe, then turns to drive his armored elbow into the gut of another.

These barbarians, different as they might be, are defined by their rage: unbridled, unquenchable, and unthinking fury. More than a mere emotion, their anger is the ferocity of a cornered predator, the unrelenting assault of a storm, the churning turmoil of the sea.

For some, their rage springs from a communion with fierce animal spirits. Others draw from a roiling reservoir of anger at a world full of pain. For every barbarian, rage is a power that fuels not just a battle frenzy but also uncanny reflexes, resilience, and feats of strength.

People of towns and cities take pride in how their civilized ways set them apart from animals, as if denying one’s own nature was a mark of superiority. To a barbarian, though, civilization is no virtue, but a sign of weakness. The strong embrace their animal nature—keen instincts, primal physicality, and ferocious rage. Barbarians are uncomfortable when hedged in by walls and crowds. They thrive in the wilds of their homelands: the tundra, jungle, or grasslands where their tribes live and hunt.

Barbarians come alive in the chaos of combat. They can enter a berserk state where rage takes over, giving them superhuman strength and resilience. A barbarian can draw on this reservoir of fury only a few times without resting, but those few rages are usually sufficient to defeat whatever threats arise.

A Life of Danger

Not every member of the tribes deemed “barbarians” by scions of civilized society has the barbarian class. A true barbarian among these people is as uncommon as a skilled fighter in a town, and he or she plays a similar role as a protector of the people and a leader in times of war. Life in the wild places of the world is fraught with peril: rival tribes, deadly weather, and terrifying monsters. Barbarians charge headlong into that danger so that their people don’t have to.

Their courage in the face of danger makes barbarians perfectly suited for adventuring. Wandering is often a way of life for their native tribes, and the rootless life of the adventurer is little hardship for a barbarian. Some barbarians miss the close-knit family structures of the tribe, but eventually find them replaced by the bonds formed among the members of their adventuring parties.

When creating a barbarian character, think about where your character comes from and his or her place in the world. Talk with your DM about an appropriate origin for your barbarian. Did you come from a distant land, making you a stranger in the area of the campaign? Or is the campaign set in a rough-and-tumble frontier where barbarians are common?

What led you to take up the adventuring life? Were you lured to settled lands by the promise of riches? Did you join forces with soldiers of those lands to face a shared threat? Did monsters or an invading horde drive you out of your homeland, making you a rootless refugee? Perhaps you were a prisoner of war, brought in chains to “civilized” lands and only now able to win your freedom. Or you might have been cast out from your people because of a crime you committed, a taboo you violated, or a coup that removed you from a position of authority.

You can make a barbarian quickly by following these suggestions. First, put your highest ability score in Strength, followed by Constitution. Second, choose the outlander background.

As a barbarian, you gain the following class features.

In battle, you fight with primal ferocity. On your turn, you can enter a rage as a bonus action.

While raging, you gain the following benefits if you aren’t wearing heavy armor:

If you are able to cast spells, you can’t cast them or concentrate on them while raging.

Your rage lasts for 1 minute. It ends early if you are knocked unconscious or if your turn ends and you haven’t attacked a hostile creature since your last turn or taken damage since then. You can also end your rage on your turn as a bonus action.

Once you have raged the number of times shown for your barbarian level in the Rages column of the Barbarian table, you must finish a long rest before you can rage again.

While you are not wearing any armor, your Armor Class equals 10 + your Dexterity modifier + your Constitution modifier. You can use a shield and still gain this benefit.

Starting at 2nd level, you can throw aside all concern for defense to attack with fierce desperation. When you make your first attack on your turn, you can decide to attack recklessly. Doing so gives you advantage on melee weapon attack rolls using Strength during this turn, but attack rolls against you have advantage until your next turn.

At 2nd level, you gain an uncanny sense of when things nearby aren’t as they should be, giving you an edge when you dodge away from danger.

You have advantage on Dexterity saving throws against effects that you can see, such as traps and spells. To gain this benefit, you can’t be blinded, deafened, or incapacitated.

At 3rd level, you choose a path that shapes the nature of your rage. The Path of the Berserker is detailed at the end of the class description, and additional primal paths are available in other sources. Your choice grants you features at 3rd level and again at 6th, 10th, and 14th levels.

Starting at 5th level, your speed increases by 10 feet while you aren’t wearing heavy armor.

By 7th level, your instincts are so honed that you have advantage on initiative rolls.

Additionally, if you are surprised at the beginning of combat and aren’t incapacitated, you can act normally on your first turn, but only if you enter your rage before doing anything else on that turn.

Beginning at 9th level, you can roll one additional weapon damage die when determining the extra damage for a critical hit with a melee attack.

Starting at 11th level, your rage can keep you fighting despite grievous wounds. If you drop to 0 hit points while you’re raging and don’t die outright, you can make a DC 10 Constitution saving throw. If you succeed, you drop to 1 hit point instead.

Each time you use this feature after the first, the DC increases by 5. When you finish a short or long rest, the DC resets to 10.

Beginning at 15th level, your rage is so fierce that it ends early only if you fall unconscious or if you choose to end it.

Beginning at 18th level, if your total for a Strength check is less than your Strength score, you can use that score in place of the total.

At 20th level, you embody the power of the wilds. Your Strength and Constitution scores increase by 4. Your maximum for those scores is now 24.

Rage burns in every barbarian’s heart, a furnace that drives him or her toward greatness. Different barbarians attribute their rage to different sources, however. For some, it is an internal reservoir where pain, grief, and anger are forged into a fury hard as steel. Others see it as a spiritual blessing, a gift of a totem animal.