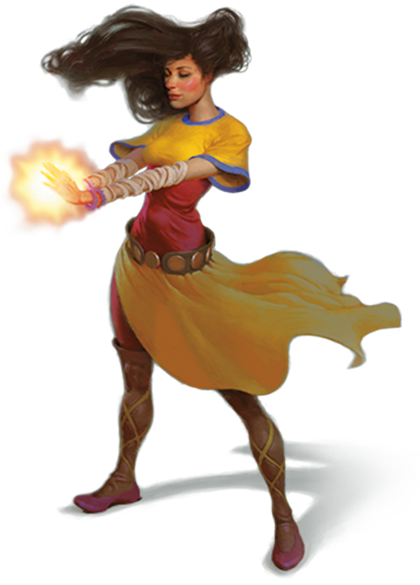 Her fists a blur as they deflect an incoming hail of arrows, a half-elf springs over a barricade and throws herself into the massed ranks of hobgoblins on the other side. She whirls among them, knocking their blows aside and sending them reeling, until at last she stands alone.

Taking a deep breath, a human covered in tattoos settles into a battle stance. As the first charging orcs reach him, he exhales and a blast of fire roars from his mouth, engulfing his foes.

Moving with the silence of the night, a black-clad halfling steps into a shadow beneath an arch and emerges from another inky shadow on a balcony a stone’s throw away. She slides her blade free of its cloth-wrapped scabbard and peers through the open window at the tyrant prince, so vulnerable in the grip of sleep.

Whatever their discipline, monks are united in their ability to magically harness the energy that flows in their bodies. Whether channeled as a striking display of combat prowess or a subtler focus of defensive ability and speed, this energy infuses all that a monk does.

The Magic of Ki

Monks make careful study of a magical energy that most monastic traditions call ki. This energy is an element of the magic that suffuses the multiverse—specifically, the element that flows through living bodies. Monks harness this power within themselves to create magical effects and exceed their bodies’ physical capabilities, and some of their special attacks can hinder the flow of ki in their opponents. Using this energy, monks channel uncanny speed and strength into their unarmed strikes. As they gain experience, their martial training and their mastery of ki gives them more power over their bodies and the bodies of their foes.

Small walled cloisters dot the landscapes of the worlds of D&D, tiny refuges from the flow of ordinary life, where time seems to stand still. The monks who live there seek personal perfection through contemplation and rigorous training. Many entered the monastery as children, sent to live there when their parents died, when food couldn’t be found to support them, or in return for some kindness that the monks had performed for their families.

Some monks live entirely apart from the surrounding population, secluded from anything that might impede their spiritual progress. Others are sworn to isolation, emerging only to serve as spies or assassins at the command of their leader, a noble patron, or some other mortal or divine power.

The majority of monks don’t shun their neighbors, making frequent visits to nearby towns or villages and exchanging their service for food and other goods. As versatile warriors, monks often end up protecting their neighbors from monsters or tyrants.

For a monk, becoming an adventurer means leaving a structured, communal lifestyle to become a wanderer. This can be a harsh transition, and monks don’t undertake it lightly. Those who leave their cloisters take their work seriously, approaching their adventures as personal tests of their physical and spiritual growth. As a rule, monks care little for material wealth and are driven by a desire to accomplish a greater mission than merely slaying monsters and plundering their treasure.

As you make your monk character, think about your connection to the monastery where you learned your skills and spent your formative years. Were you an orphan or a child left on the monastery’s threshold? Did your parents promise you to the monastery in gratitude for a service performed by the monks? Did you enter this secluded life to hide from a crime you committed? Or did you choose the monastic life for yourself?

Consider why you left. Did the head of your monastery choose you for a particularly important mission beyond the cloister? Perhaps you were cast out because of some violation of the community’s rules. Did you dread leaving, or were you happy to go? Is there something you hope to accomplish outside the monastery? Are you eager to return to your home?

As a result of the structured life of a monastic community and the discipline required to harness ki, monks are almost always lawful in alignment.

You can make a monk quickly by following these suggestions. First, make Dexterity your highest ability score, followed by Wisdom. Second, choose the hermit background.

As a monk, you gain the following class features.

Beginning at 1st level, while you are wearing no armor and not wielding a shield, your AC equals 10 + your Dexterity modifier + your Wisdom modifier.

At 1st level, your practice of martial arts gives you mastery of combat styles that use unarmed strikes and monk weapons, which are shortswords and any simple melee weapons that don’t have the two-handed or heavy property.

You gain the following benefits while you are unarmed or wielding only monk weapons and you aren’t wearing armor or wielding a shield:

Certain monasteries use specialized forms of the monk weapons. For example, you might use a club that is two lengths of wood connected by a short chain (called a nunchaku) or a sickle with a shorter, straighter blade (called a kama). Whatever name you use for a monk weapon, you can use the game statistics provided for the weapon in the Weapons section.

Starting at 2nd level, your training allows you to harness the mystic energy of ki. Your access to this energy is represented by a number of ki points. Your monk level determines the number of points you have, as shown in the Ki Points column of the Monk table.

You can spend these points to fuel various ki features. You start knowing three such features: Flurry of Blows, Patient Defense, and Step of the Wind. You learn more ki features as you gain levels in this class.

When you spend a ki point, it is unavailable until you finish a short or long rest, at the end of which you draw all of your expended ki back into yourself. You must spend at least 30 minutes of the rest meditating to regain your ki points.

Some of your ki features require your target to make a saving throw to resist the feature’s effects. The saving throw DC is calculated as follows:

Ki save DC = 8 + your proficiency bonus + your Wisdom modifier

Immediately after you take the Attack action on your turn, you can spend 1 ki point to make two unarmed strikes as a bonus action.

You can spend 1 ki point to take the Dodge action as a bonus action on your turn.

Step of the Wind

You can spend 1 ki point to take the Disengage or Dash action as a bonus action on your turn, and your jump distance is doubled for the turn.

Starting at 2nd level, your speed increases by 10 feet while you are not wearing armor or wielding a shield. This bonus increases when you reach certain monk levels, as shown in the Monk table.

At 9th level, you gain the ability to move along vertical surfaces and across liquids on your turn without falling during the move.

When you reach 3rd level, you commit yourself to a monastic tradition: the Way of the Open Hand, detailed at the end of the class description or one from another source. Your tradition grants you features at 3rd level and again at 6th, 11th, and 17th level.

Starting at 3rd level, you can use your reaction to deflect or catch the missile when you are hit by a ranged weapon attack. When you do so, the damage you take from the attack is reduced by 1d10 + your Dexterity modifier + your monk level.

If you reduce the damage to 0, you can catch the missile if it is small enough for you to hold in one hand and you have at least one hand free. If you catch a missile in this way, you can spend 1 ki point to make a ranged attack with the weapon or piece of ammunition you just caught, as part of the same reaction. You make this attack with proficiency, regardless of your weapon proficiencies, and the missile counts as a monk weapon for the attack, which has a normal range of 20 feet and a long range of 60 feet.

Beginning at 4th level, you can use your reaction when you fall to reduce any falling damage you take by an amount equal to five times your monk level.

Starting at 5th level, you can interfere with the flow of ki in an opponent’s body. When you hit another creature with a melee weapon attack, you can spend 1 ki point to attempt a stunning strike. The target must succeed on a Constitution saving throw or be stunned until the end of your next turn.

Starting at 6th level, your unarmed strikes count as magical for the purpose of overcoming resistance and immunity to nonmagical attacks and damage.

Starting at 7th level, you can use your action to end one effect on yourself that is causing you to be charmed or frightened.

At 10th level, your mastery of the ki flowing through you makes you immune to disease and poison.

Tongue of the Sun and Moon

Beginning at 14th level, your mastery of ki grants you proficiency in all saving throws.

Additionally, whenever you make a saving throw and fail, you can spend 1 ki point to reroll it and take the second result.

At 15th level, your ki sustains you so that you suffer none of the frailty of old age, and you can’t be aged magically. You can still die of old age, however. In addition, you no longer need food or water.

Beginning at 18th level, you can use your action to spend 4 ki points to become invisible for 1 minute. During that time, you also have resistance to all damage but force damage.

Additionally, you can spend 8 ki points to cast the astral projection spell, without needing material components. When you do so, you can’t take any other creatures with you.

At 20th level, when you roll for initiative and have no ki points remaining, you regain 4 ki points.

Three traditions of monastic pursuit are common in the monasteries scattered across the multiverse. Most monasteries practice one tradition exclusively, but a few honor the three traditions and instruct each monk according to his or her aptitude and interest. All three traditions rely on the same basic techniques, diverging as the student grows more adept. Thus, a monk need choose a tradition only upon reaching 3rd level.