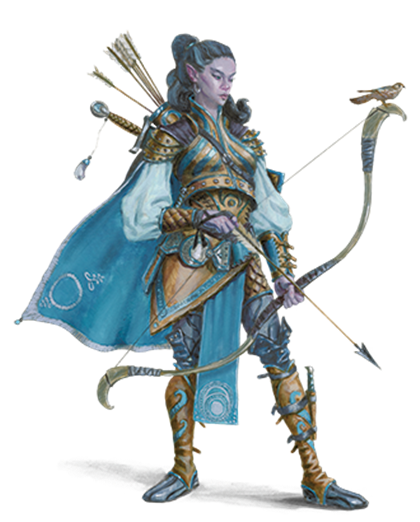 Rough and wild looking, a human stalks alone through the shadows of trees, hunting the orcs he knows are planning a raid on a nearby farm. Clutching a shortsword in each hand, he becomes a whirlwind of steel, cutting down one enemy after another.

After tumbling away from a cone of freezing air, an elf finds her feet and draws back her bow to loose an arrow at the white dragon. Shrugging off the wave of fear that emanates from the dragon like the cold of its breath, she sends one arrow after another to find the gaps between the dragon’s thick scales.

Holding his hand high, a half-elf whistles to the hawk that circles high above him, calling the bird back to his side. Whispering instructions in Elvish, he points to the owlbear he’s been tracking and sends the hawk to distract the creature while he readies his bow.

Far from the bustle of cities and towns, past the hedges that shelter the most distant farms from the terrors of the wild, amid the dense-packed trees of trackless forests and across wide and empty plains, rangers keep their unending watch.

Warriors of the wilderness, rangers specialize in hunting the monsters that threaten the edges of civilization—humanoid raiders, rampaging beasts and monstrosities, terrible giants, and deadly dragons. They learn to track their quarry as a predator does, moving stealthily through the wilds and hiding themselves in brush and rubble. Rangers focus their combat training on techniques that are particularly useful against their specific favored foes.

Thanks to their familiarity with the wilds, rangers acquire the ability to cast spells that harness nature’s power, much as a druid does. Their spells, like their combat abilities, emphasize speed, stealth, and the hunt. A ranger’s talents and abilities are honed with deadly focus on the grim task of protecting the borderlands.

Though a ranger might make a living as a hunter, a guide, or a tracker, a ranger’s true calling is to defend the outskirts of civilization from the ravages of monsters and humanoid hordes that press in from the wild. In some places, rangers gather in secretive orders or join forces with druidic circles. Many rangers, though, are independent almost to a fault, knowing that, when a dragon or a band of orcs attacks, a ranger might be the first—and possibly the last—line of defense.

This fierce independence makes rangers well suited to adventuring, since they are accustomed to life far from the comforts of a dry bed and a hot bath. Faced with city-bred adventurers who grouse and whine about the hardships of the wild, rangers respond with some mixture of amusement, frustration, and compassion. But they quickly learn that other adventurers who can carry their own weight in a fight against civilization’s foes are worth any extra burden. Coddled city folk might not know how to feed themselves or find fresh water in the wild, but they make up for it in other ways.

As you create your ranger character, consider the nature of the training that gave you your particular capabilities. Did you train with a single mentor, wandering the wilds together until you mastered the ranger’s ways? Did you leave your apprenticeship, or was your mentor slain—perhaps by the same kind of monster that became your favored enemy? Or perhaps you learned your skills as part of a band of rangers affiliated with a druidic circle, trained in mystic paths as well as wilderness lore. You might be self-taught, a recluse who learned combat skills, tracking, and even a magical connection to nature through the necessity of surviving in the wilds.

What’s the source of your particular hatred of a certain kind of enemy? Did a monster kill someone you loved or destroy your home village? Or did you see too much of the destruction these monsters cause and commit yourself to reining in their depredations? Is your adventuring career a continuation of your work in protecting the borderlands, or a significant change? What made you join up with a band of adventurers? Do you find it challenging to teach new allies the ways of the wild, or do you welcome the relief from solitude that they offer?

You can make a ranger quickly by following these suggestions. First, make Dexterity your highest ability score, followed by Wisdom. (Some rangers who focus on two-weapon fighting make Strength higher than Dexterity.) Second, choose the outlander background.

As a ranger, you gain the following class features.

Beginning at 1st level, you have significant experience studying, tracking, hunting, and even talking to a certain type of enemy.

You have advantage on Wisdom (Survival) checks to track your favored enemies, as well as on Intelligence checks to recall information about them.

When you gain this feature, you also learn one language of your choice that is spoken by your favored enemies, if they speak one at all.

You choose one additional favored enemy, as well as an associated language, at 6th and 14th level. As you gain levels, your choices should reflect the types of monsters you have encountered on your adventures.

You are particularly familiar with one type of natural environment and are adept at traveling and surviving in such regions. Choose one type of favored terrain: arctic, coast, desert, forest, grassland, mountain, swamp, or the Underdark. When you make an Intelligence or Wisdom check related to your favored terrain, your proficiency bonus is doubled if you are using a skill that you’re proficient in.

While traveling for an hour or more in your favored terrain, you gain the following benefits:

At 2nd level, you adopt a particular style of fighting as your specialty. Choose one of the following options.

You can’t take a Fighting Style option more than once, even if you later get to choose again.

You gain a +2 bonus to attack rolls you make with ranged weapons.

While you are wearing armor, you gain a +1 bonus to AC.

When you are wielding a melee weapon in one hand and no other weapons, you gain a +2 bonus to damage rolls with that weapon.

When you engage in two-weapon fighting, you can add your ability modifier to the damage of the second attack.

By the time you reach 2nd level, you have learned to use the magical essence of nature to cast spells, much as a druid does. See Spells Rules for the general rules of spellcasting and the Spells Listing for the ranger spell list.

The Ranger table shows how many spell slots you have to cast your ranger spells of 1st level and higher. To cast one of these spells, you must expend a slot of the spell’s level or higher. You regain all expended spell slots when you finish a long rest.

You know two 1st-level spells of your choice from the ranger spell list.

The Spells Known column of the Ranger table shows when you learn more ranger spells of your choice. Each of these spells must be of a level for which you have spell slots. For instance, when you reach 5th level in this class, you can learn one new spell of 1st or 2nd level.

Additionally, when you gain a level in this class, you can choose one of the ranger spells you know and replace it with another spell from the ranger spell list, which also must be of a level for which you have spell slots.

At 3rd level, you choose an archetype that you strive to emulate: the Hunter that is detailed at the end of the class description or one from another source. Your choice grants you features at 3rd level and again at 7th, 11th, and 15th level.

Beginning at 3rd level, you can use your action and expend one ranger spell slot to focus your awareness on the region around you. For 1 minute per level of the spell slot you expend, you can sense whether the following types of creatures are present within 1 mile of you (or within up to 6 miles if you are in your favored terrain): aberrations, celestials, dragons, elementals, fey, fiends, and undead. This feature doesn’t reveal the creatures’ location or number.

Starting at 8th level, moving through nonmagical difficult terrain costs you no extra movement. You can also pass through nonmagical plants without being slowed by them and without taking damage from them if they have thorns, spines, or a similar hazard.

In addition, you have advantage on saving throws against plants that are magically created or manipulated to impede movement, such those created by the entangle spell.

Starting at 10th level, you can spend 1 minute creating camouflage for yourself. You must have access to fresh mud, dirt, plants, soot, and other naturally occurring materials with which to create your camouflage.

Once you are camouflaged in this way, you can try to hide by pressing yourself up against a solid surface, such as a tree or wall, that is at least as tall and wide as you are. You gain a +10 bonus to Dexterity (Stealth) checks as long as you remain there without moving or taking actions. Once you move or take an action or a reaction, you must camouflage yourself again to gain this benefit.

Starting at 14th level, you can use the Hide action as a bonus action on your turn. Also, you can’t be tracked by nonmagical means, unless you choose to leave a trail.

At 18th level, you gain preternatural senses that help you fight creatures you can’t see. When you attack a creature you can’t see, your inability to see it doesn’t impose disadvantage on your attack rolls against it.

You are also aware of the location of any invisible creature within 30 feet of you, provided that the creature isn’t hidden from you and you aren’t blinded or deafened.

At 20th level, you become an unparalleled hunter of your enemies. Once on each of your turns, you can add your Wisdom modifier to the attack roll or the damage roll of an attack you make against one of your favored enemies. You can choose to use this feature before or after the roll, but before any effects of the roll are applied.

The ideal of the ranger has classic expressions. These are detailed below.