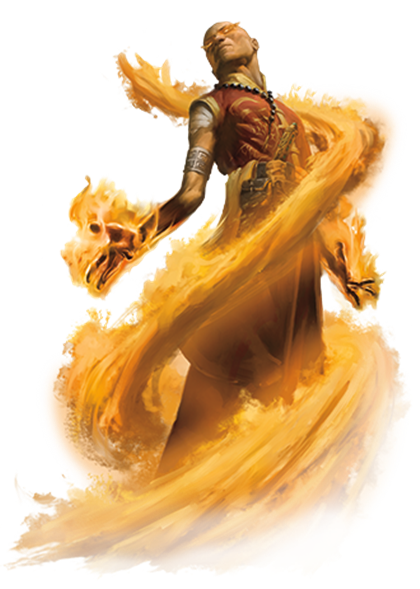 Golden eyes flashing, a human stretches out her hand and unleashes the dragonfire that burns in her veins. As an inferno rages around her foes, leathery wings spread from her back and she takes to the air.

Long hair whipped by a conjured wind, a half-elf spreads his arms wide and throws his head back. Lifting him momentarily off the ground, a wave of magic surges up in him, through him, and out from him in a mighty blast of lightning.

Crouching behind a stalagmite, a halfling points a finger at a charging troglodyte. A blast of fire springs from her finger to strike the creature. She ducks back behind the rock formation with a grin, unaware that her wild magic has turned her skin bright blue.

Sorcerers carry a magical birthright conferred upon them by an exotic bloodline, some otherworldly influence, or exposure to unknown cosmic forces. One can’t study sorcery as one learns a language, any more than one can learn to live a legendary life. No one chooses sorcery; the power chooses the sorcerer.

Magic is a part of every sorcerer, suffusing body, mind, and spirit with a latent power that waits to be tapped. Some sorcerers wield magic that springs from an ancient bloodline infused with the magic of dragons. Others carry a raw, uncontrolled magic within them, a chaotic storm that manifests in unexpected ways.

The appearance of sorcerous powers is wildly unpredictable. Some draconic bloodlines produce exactly one sorcerer in every generation, but in other lines of descent every individual is a sorcerer. Most of the time, the talents of sorcery appear as apparent flukes. Some sorcerers can’t name the origin of their power, while others trace it to strange events in their own lives. The touch of a demon, the blessing of a dryad at a baby’s birth, or a taste of the water from a mysterious spring might spark the gift of sorcery. So too might the gift of a deity of magic, exposure to the elemental forces of the Inner Planes or the maddening chaos of Limbo, or a glimpse into the inner workings of reality.

Sorcerers have no use for the spellbooks and ancient tomes of magic lore that wizards rely on, nor do they rely on a patron to grant their spells as warlocks do. By learning to harness and channel their own inborn magic, they can discover new and staggering ways to unleash that power.

Sorcerers are rare in the world, and it’s unusual to find a sorcerer who is not involved in the adventuring life in some way. People with magical power seething in their veins soon discover that the power doesn’t like to stay quiet. A sorcerer’s magic wants to be wielded, and it has a tendency to spill out in unpredictable ways if it isn’t called on.

Sorcerers often have obscure or quixotic motivations driving them to adventure. Some seek a greater understanding of the magical force that infuses them, or the answer to the mystery of its origin. Others hope to find a way to get rid of it, or to unleash its full potential. Whatever their goals, sorcerers are every bit as useful to an adventuring party as wizards, making up for a comparative lack of breadth in their magical knowledge with enormous flexibility in using the spells they know.

The most important question to consider when creating your sorcerer is the origin of your power. As a starting character, you’ll choose an origin that ties to a draconic bloodline or the influence of wild magic, but the exact source of your power is up to you to decide. Is it a family curse, passed down to you from distant ancestors? Or did some extraordinary event leave you blessed with inherent magic but perhaps scarred as well?

How do you feel about the magical power coursing through you? Do you embrace it, try to master it, or revel in its unpredictable nature? Is it a blessing or a curse? Did you seek it out, or did it find you? Did you have the option to refuse it, and do you wish you had? What do you intend to do with it? Perhaps you feel like you’ve been given this power for some lofty purpose. Or you might decide that the power gives you the right to do what you want, to take what you want from those who lack such power. Perhaps your power links you to a powerful individual in the world—the fey creature that blessed you at birth, the dragon who put a drop of its blood into your veins, the lich who created you as an experiment, or the deity who chose you to carry this power.

You can make a sorcerer quickly by following these suggestions. First, Charisma should be your highest ability score, followed by Constitution. Second, choose the hermit background. Third, choose the light, prestidigitation, ray of frost, and shocking grasp cantrips, along with the 1st-level spells shield and magic missile.

As a sorcerer, you gain the following class features.

An event in your past, or in the life of a parent or ancestor, left an indelible mark on you, infusing you with arcane magic. This font of magic, whatever its origin, fuels your spells. See Spells Rules for the general rules of spellcasting and the Spells Listing for the sorcerer spell list.

The Sorcerer table shows how many spell slots you have to cast your sorcerer spells of 1st level and higher. To cast one of these sorcerer spells, you must expend a slot of the spell’s level or higher. You regain all expended spell slots when you finish a long rest.

You know two 1st-level spells of your choice from the sorcerer spell list.

The Spells Known column of the Sorcerer table shows when you learn more sorcerer spells of your choice. Each of these spells must be of a level for which you have spell slots. For instance, when you reach 3rd level in this class, you can learn one new spell of 1st or 2nd level.

Additionally, when you gain a level in this class, you can choose one of the sorcerer spells you know and replace it with another spell from the sorcerer spell list, which also must be of a level for which you have spell slots.

Charisma is your spellcasting ability for your sorcerer spells, since the power of your magic relies on your ability to project your will into the world. You use your Charisma whenever a spell refers to your spellcasting ability. In addition, you use your Charisma modifier when setting the saving throw DC for a sorcerer spell you cast and when making an attack roll with one.

You can use an arcane focus (see the Adventuring Gear section) as a spellcasting focus for your sorcerer spells.

Choose a sorcerous origin, which describes the source of your innate magical power: Draconic Bloodline, detailed at the end of the class description, or one from another source.

Your choice grants you features when you choose it at 1st level and again at 6th, 14th, and 18th level.

At 2nd level, you tap into a deep wellspring of magic within yourself. This wellspring is represented by sorcery points, which allow you to create a variety of magical effects.

You have 2 sorcery points, and you gain more as you reach higher levels, as shown in the Sorcery Points column of the Sorcerer table. You can never have more sorcery points than shown on the table for your level. You regain all spent sorcery points when you finish a long rest.

Any spell slot you create with this feature vanishes when you finish a long rest.

Converting a Spell Slot to Sorcery Points. As a bonus action on your turn, you can expend one spell slot and gain a number of sorcery points equal to the slot’s level.

At 3rd level, you gain the ability to twist your spells to suit your needs. You gain two of the following Metamagic options of your choice. You gain another one at 10th and 17th level.

You can use only one Metamagic option on a spell when you cast it, unless otherwise noted.

When you cast a spell that has a range of 5 feet or greater, you can spend 1 sorcery point to double the range of the spell.

When you cast a spell that has a range of touch, you can spend 1 sorcery point to make the range of the spell 30 feet.

When you roll damage for a spell, you can spend 1 sorcery point to reroll a number of the damage dice up to your Charisma modifier (minimum of one). You must use the new rolls.

You can use Empowered Spell even if you have already used a different Metamagic option during the casting of the spell.

When you cast a spell that has a duration of 1 minute or longer, you can spend 1 sorcery point to double its duration, to a maximum duration of 24 hours.

When you cast a spell that forces a creature to make a saving throw to resist its effects, you can spend 3 sorcery points to give one target of the spell disadvantage on its first saving throw made against the spell.

When you cast a spell that has a casting time of 1 action, you can spend 2 sorcery points to change the casting time to 1 bonus action for this casting.

When you cast a spell, you can spend 1 sorcery point to cast it without any somatic or verbal components.

When you cast a spell that targets only one creature and doesn’t have a range of self, you can spend a number of sorcery points equal to the spell’s level to target a second creature in range with the same spell (1 sorcery point if the spell is a cantrip).

To be eligible, a spell must be incapable of targeting more than one creature at the spell’s current level. For example, magic missile and scorching ray aren’t eligible, but ray of frost and chromatic orb are.

At 20th level, you regain 4 expended sorcery points whenever you finish a short rest.