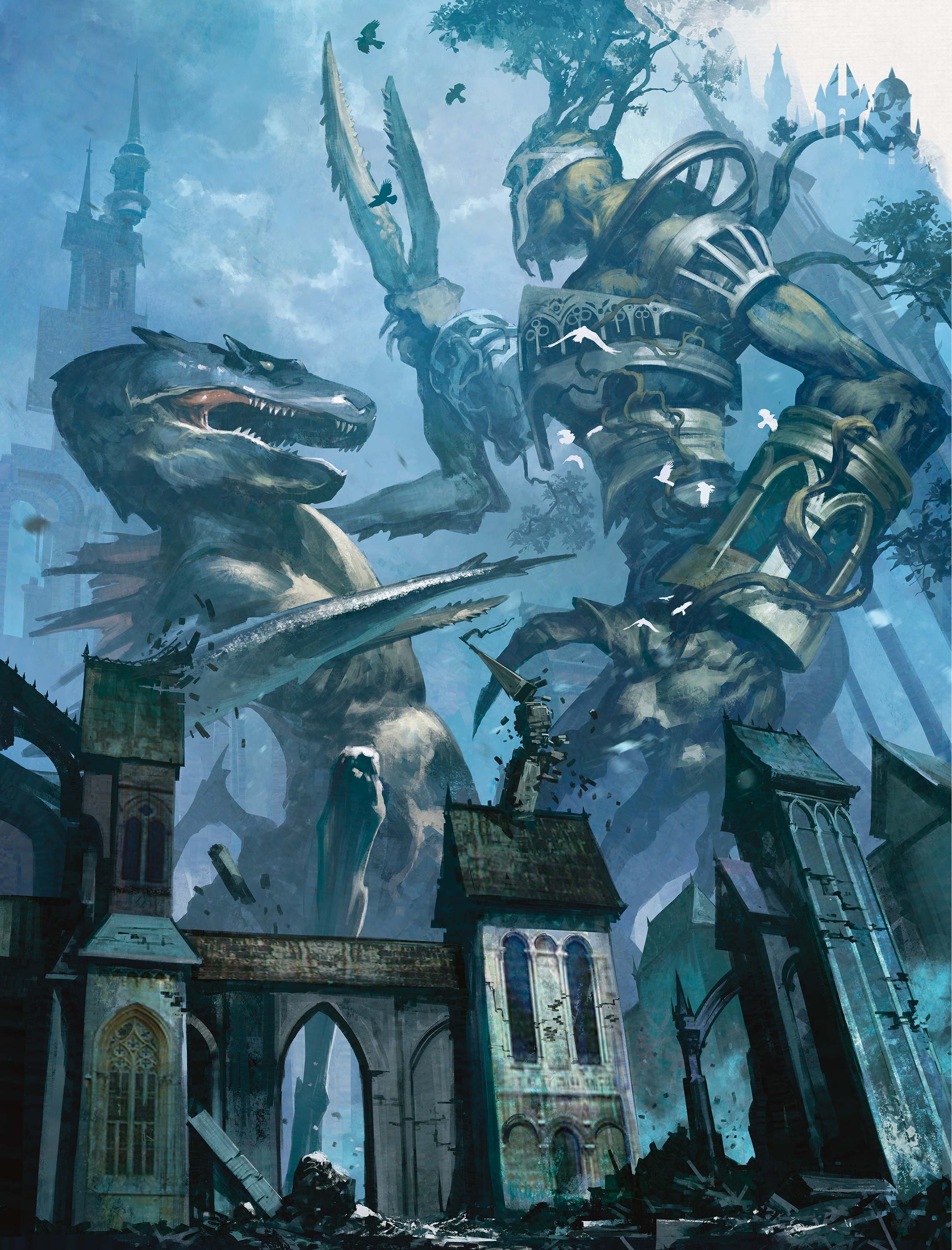 Ravnica is home to a great variety of creatures, including some that are unknown on other worlds in Dungeons & Dragons. This chapter provides stat blocks for many of these creatures, and it concludes with a collection of nonplayer characters who fill the ranks of Ravnica’s guilds.

Some of the stat blocks in this source have a special feature: guild spells. If a stat block says its creature is a spellcaster of a particular guild — an Izzet spellcaster, for instance — that creature’s spell list includes one or more spells from that guild’s spell list. See chapter 2 for the guilds’ lists.

Most of these monsters are in this source (GGR) or the Monster Manual (MM), but some of the monsters from Volo’s Guide to Monsters (VGM) and Mordenkainen’s Tome of Foes (MTF) are also mentioned.

Most creatures associated with the Azorius Senate are humanoids (largely humans and vedalken) and various others that serve as familiars, pets, and mounts. Owls are popular familiars, since they are viewed as symbols of wisdom and sound judgment. Sphinxes and archons are the rare nonhumanoids that play a significant role in the leadership and operation of the guild.

Azorius lawmages craft one-eyed homunculi to perform menial tasks in Azorius buildings. These homunculi use the statistics of a regular homunculus except that they are wingless and have no flying speed.

Azorius sphinxes, known as sphinxes of judgment, wield hieromancy — the power of law magic — with the force of a judge’s gavel to imprison criminals and compel truth from them. A sphinx of judgment is a gynosphinx, as described in the Monster Manual, but it is an Azorius spellcaster with the following wizard spells prepared:

The Boros Legion employs many different creatures to swell the ranks of its soldiery. These creatures might serve as companions, guardians, or mounts.

Flame-kin (which use the azer stat block in the Monster Manual) are elemental soldiers magically created and animated to serve the legion as scouts and shock troops. Fanatical and inflexible, they are relics of a time when the guild was more concerned with zealotry than justice. They take the field for large military engagements.

Alongside human and vampire spies and assassins, a variety of stealthy and shadowy monsters contribute to the work of House Dimir. Doppelgangers and invisible stalkers move unseen among the populace. Horrors — as well as gricks, intellect devourers, and similar monsters — are thought to be the fears of Ravnica’s populace given form by Dimir magic. And undead such as shadows, wraiths, and Nightveil specters keep watch over secret Dimir territories.

The Devkarin elves (drow), deadly medusas, and insectile kraul are the three most important power groups among the Golgari Swarm, vying for control over a teeming horde of lesser (or at least less ambitious) creatures.

A significant shift in the Golgari balance of power began when the kraul death priest Mazirek discovered an ancient mausoleum compound. Deep in the undercity, beneath the layers of civilization that had built up over millennia, Mazirek found a hidden network of vaults called Umerilek, an enormous structure that would have dominated a city block. Inside were hundreds of well-preserved corpses suffused with a latent necromantic power that Mazirek activated, bringing the corpses back to a shambling semblance of life. This new race of undead is called the Erstwhile (equivalent to the wight in the Monster Manual).

In their time, the Erstwhile were aristocratic elves of immense wealth and opulence. They still wear their stately attire, despite its moldering condition, and they lend an air of high culture to the undercity court of the Golgari.

Golgari territory is filled with creatures composed of fungus and detritus from the guild’s rot farms. Shriekers serve as sentries in Golgari tunnels, and violet fungus sprouts from the corpses of intruders. Amorphous masses of dead and decaying matter can develop into shambling mounds in the spore-saturated environment of the undercity.

Some Golgari creatures are symbiotic fusions of fungus and living creatures. Golgari trolls are hulking sewer dwellers with fungus adorning their bodies like manes, acting as extra layers for their already tough hide and facilitating their regeneration.

Beetles, centipedes, spiders, and countless other insects and arachnids infest Golgari warrens. These creatures, often associated with decay and rebirth, are prized by the guild. Giant bugs serve as beasts of burden, companions, steeds, and guardians. Among the largest of these is the Deadbridge goliath beetle (equivalent to the triceratops in the Monster Manual).

Piranha beetles (best represented as a swarm of insects, from the Monster Manual) burrow through the soft earth and gather into swarms to overtake their victims and strip the flesh from them. Skein spiders (as giant spiders, from the Monster Manual) are an important part of Golgari reclamation work: fungus grows rapidly along the silken spiderwebs, expanding to engulf architecture and hasten the Golgari annexation process.

The guild encourages the use and exploration of necromancy. Fungus covers the bodies of most of the undead that serve the guild, the majority of which are fungus drudges (equivalent to zombies in the Monster Manual) — mindless servants animated by the fungus that infests their bodies.

Many dangerous creatures haunt the rubblebelts and other places the Gruul Clans inhabit.

Any beast described in this source or in the Monster Manual can roam the rubblebelts. The Gruul can bring out the fury in these beasts, turning them into ragebeasts. Ragebeasts often have the Reckless and Siege Monster traits:

Gruul shamans channel primal energies to summon raging fire elementals that blaze ahead of marauding Gruul bands. Or they transform the rubble and detritus of civilization into earth elementals, twisted through with choking vines, that literally give new life to the ruin of the city. These elementals are intensely destructive, but they last only as long as the magic used to summon them persists.

Nearly all the Gruul Clans include hill giants, stone giants, cyclopes, ogres, ettins, and fomorians among their number, and one clan — the Bolrac clan — is composed entirely of such brutes.

Once a hydra chooses a lair and declares the surrounding land its territory, it’s almost impossible to drive the creature out. The Gruul revere these multiheaded predators as vestiges of the ancient times before the guilds took over the world. They don’t kill hydras for trophies, but pulling a spine from a hydra’s neck is a mark of great bravery among the Gruul.

Izzet laboratories are staffed with attendants (commoners) and chemisters (mages). Pixies and sprites (called ratchet faeries) find employment among the Izzet working on projects that are too small for other races.

The Izzet League employs elementals formed from the combination of two or more elemental forces, including mephits of the smoke, steam, ice, and magma varieties.

The Orzhov Syndicate attracts and entraps beings of all kinds, from lowly bats and manufactured thrulls to brutal giants and exalted angels. Orzhov gargoyles, animated by magic that manifests as a green, smoky glow in their eyes and gaping mouths, keep watch over banks and basilicas, and bloodthirsty vampires lurk in the vaults and crypts below.

All sorts of savage, howling beasts accompany Rakdos cultists. Hell hounds, nightmares, and magmins might perform alongside the other entertainers or accompany notable members of the cult as guardians and companions. Rakdos giants, along with ogres draped in hooked chains and spikes, carry and set up tents and stages — and cause utter mayhem when blood lust seizes them. 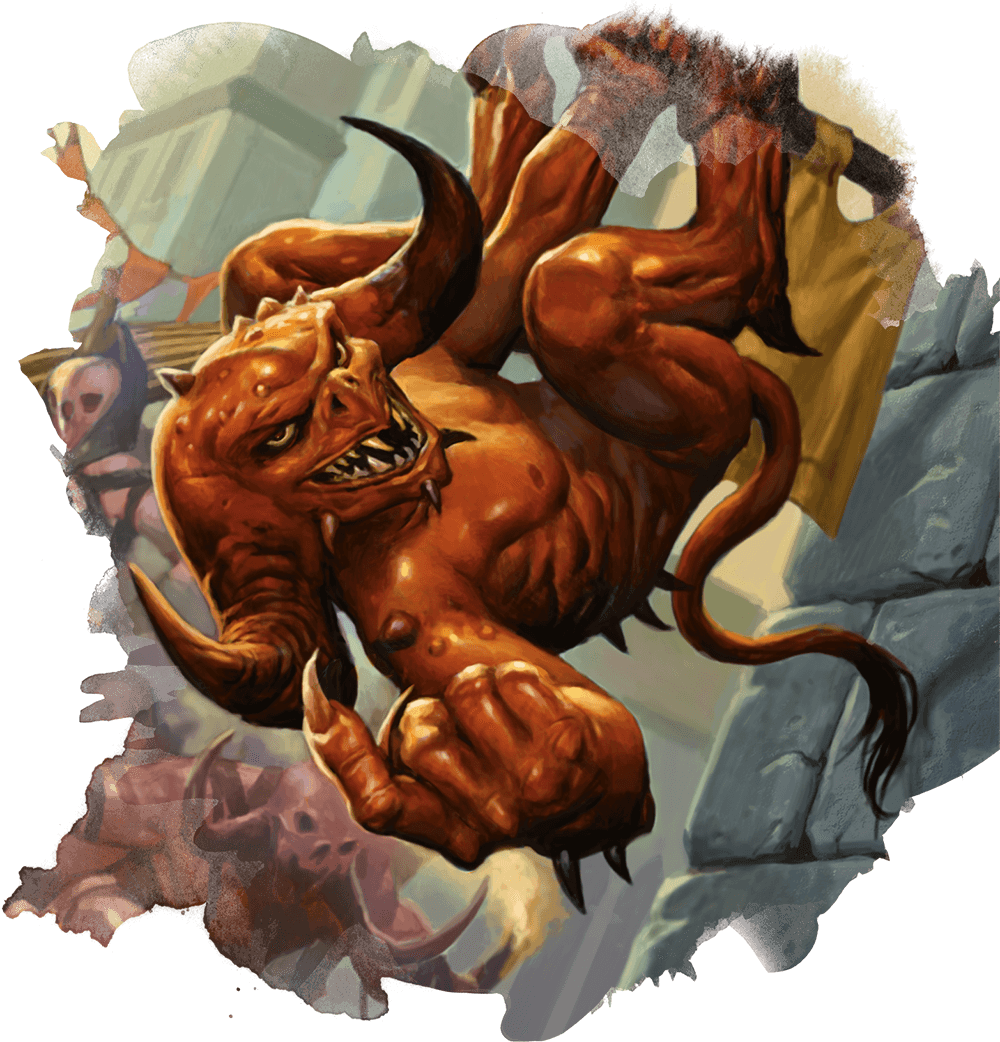 The Selesnya Conclave uses its close connection to nature to enlist a variety of creatures to its cause. These supporters of the conclave take their rightful place in the natural order alongside its more humanlike members.

Elementals rise to the guild’s defense when the Selesnya Conclave is drawn into conflict. Most of these elementals are made from the roots and branches of trees, making them equivalent to awakened shrubs or awakened trees. Earth elementals incorporate building materials in their forms to serve as armor and weapons.

Many Selesnya buildings, temples, and paths are protected by treants or carnivorous plants, including blights and shambling mounds. Some have vine-like arms that ensnare prey and drop it into pitcher-like bodies filled with acid. Others are covered with sticky glue that immobilizes and slowly digests the hapless victim.

Most often found carrying equenauts in battle, pegasi are ready allies who share the guild’s goals and virtues. Members of the guild raise them from infancy, carefully protecting the foals from griffons, drakes, and other aerial predators.

Simic scientists are interested in the ways that all life forms adapt to their changing environments, but they have a particular fascination with the largest creatures. In a world covered with urban construction, most of these creatures soar above the city or glide deep below it in subterranean oceans accessible only through the Simic zonots.

Simic scientists use the term “benthid” to refer to the leviathans of the deep. These creatures vary greatly in size and morphology, so they might be represented by the statistics for a giant octopus, plesiosaurus, killer whale, giant shark, dragon turtle, or kraken.

Ravnica’s merfolk are unique to the Simic. They emerged from the depths of the plane’s long-buried oceans less than a century ago and immediately took on leadership positions in the guild. They claim a deep connection to Ravnica’s primal oceans, which are almost untouched by civilization. They have the statistics of the merfolk in the Monster Manual, except that they speak Common and Merfolk, and their legs give them a walking speed of 30 feet.

A monster that doesn’t appear on the tables in this section can show up in Ravnica. Other categories of creatures that exist in the world include the following:

Undercity Denizens. Creatures that don’t have clear guild connections, such as carrion crawlers and otyughs, creep and slink through the undercity.

Undead. Orzhov spirits and Golgari zombies are not the extent of undead in Ravnica. Wherever people die, there’s a chance of them returning as revenants, ghosts, or other forms of undead.

The Guildless. The nonplayer characters presented in the Monster Manual and other sources can represent any of the ordinary citizens of Ravnica, whether they are connected to guilds or not. Commoners go about their daily business, bandits prey on the weak, and cultists lurk in shadowed shrines, either hidden from the guilds or beneath their notice.

Ordinary Animals. Virtually any of the creatures that appear in appendix A of the Monster Manual could show up in Ravnica. Many such creatures are confined to small greenbelts or the ruined rubblebelts, but others thrive in the urban environment, including birds, scavengers, and sewer dwellers. 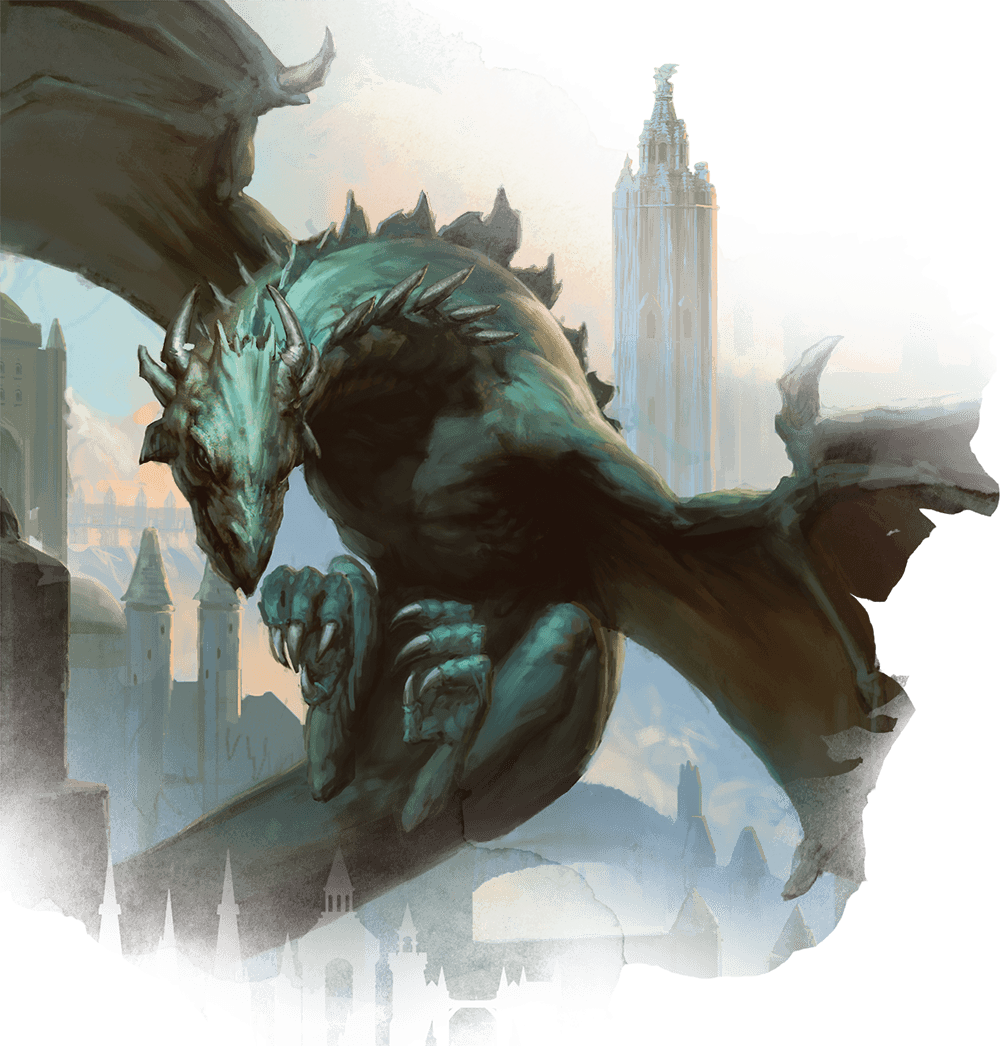 The winged reptiles known as drakes are a common sight in the skies of Ravnica. They soar above the spires and rooftops hunting for aerial prey. Highly trainable, they are favored as pets, servants, and mounts.

You can use stat blocks from the Monster Manual to represent various pack beasts encountered in Ravnica, as indicated in the Pack Beasts table.

Brushstrider. Destructive when confined, brushstriders thrive when they can freely wander garden areas.

Ceratok. A ceratok has two curving horns at the end of its snout.

Dromad. A dromad is similar to a camel, but it lacks a hump.

Indrik. With their long necks, indriks are common sights in the Tenth District. They are ornery creatures; an indrik without a handler to order it around usually goes on a rampage or flees.

Raktusk. A raktusk is a bison-like creature, about 10 feet tall at the shoulder.